I was hoping I could just sneak in a cheeky little photo blog for Khajuraho and be done with it because I thought it’d just be a bunch of pretty temples adorned with a spot of casual porn and I could simply snigger my way around them like the child I am then upload all the cock shots to my blog and continue on my way. No. Turns out that Khajuraho is a ridiculously interesting place steeped in history and mythology and dammit I should never had hired the fucking audio guide. I’m not going to put every single thing I learned in here on account of the fact I don’t have the rest of my life to write this, but here’s the basic gist of it.

Many shit tonne of years ago a woman called Hemvati was bathing in a lake and the moon god, Chandra, decided he fancied a bit of a shag and she was pretty hot so he descended from the sky for a night of passion. Gods do seem to have a bit of a thing for extramarital action with mortals throughout many religions. Zeus was a bugger for it. The Christian god, well, we all know that story. You just can’t blame unexplained pregnancies on gods anymore though can you, these days it’s a DNA test and a slanging match on Jeremy Kyle. Anyway, after Chandra wiped his knob off and started to head back into the heavens he told Hemvati that she would give birth to a boy who would eventually become a great ruler. So Chandravarman, as she called him, did indeed become ruler of the Chandelas and he was a badass motherfucker who could kill tigers with his bare hands which would also be frowned upon these days and he’d be named and shamed on Facebook, but the Chandelas were merely subordinate rulers. That last bit is actually properly true an’ all. All the battles they fought and everything they won was for their rulers, until one day they conquered Kalinjar Fort and were like, y’know what? We’re keeping this bastard. So the symbol of the Chandelas is a man grappling with a mythical lion, possibly on account of the fact that they overthrew their bosses, the bigger party, but to be honest the bloke in the sculptures doesn’t look like he has the upper hand.

Well someone is having a good time. 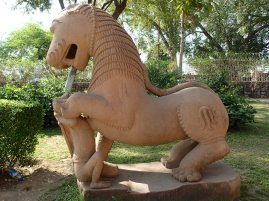 Yeah I don’t think it looks like the dude is overpowering anything right now.

The Chandelas loved the arts so they built these temples over the centuries, starting in the AD900’s and finishing around the AD1500’s. The oldest is possibly the Varaha Temple built, they think, in 925AD. It contains a statue of the boar Varaha, the third incarnation of Vishnu, who went to the bottom of the ocean and sniffed out the Earth. Because boars are that well known marine animal and certainly the best animal for the job. A demon had stolen the Earth and hid her (I say her as she was personified as the goddess Bhudevi in this story), in the sea, so Varaha got her back and lifted her up on his tusks. This statue of Varaha is covered in carvings of tiny deities all over it, it’s an absolutely stunning work of art. The Lakshmana Temple is also dedicated to Vishnu in his cosmic incarnation with the head of a man, a lion and a boar, and was built to commemorate the capture of the fort that ultimately lead them to independence. There is lots of porn on this temple. Lots. There’s a couple of sixty niners including a vertical one which I can’t imagine being too comfortable for the poor bugger who’s got to be upside down, lots of blow jobs, a bit of doggy style, orgies, and a couple of guys spit-roasting a horse. All carved out in beautiful, intricate details. I can’t even imagine the hours and the skill that went into this temple alone.

Kandarita Temple carvings. There are shit loads of them on this temple. 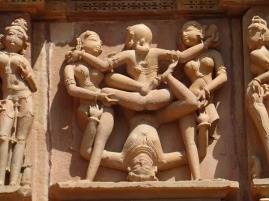 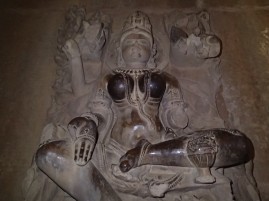 The Kandariya Temple, built circa 1025 – 1050AD, is made from sandstone and no mortar was used. The pieces interlock and are held in place by gravity and it’s the biggest temple of the whole Western Group. This one contains, amongst other things, a Shivlinga which is the phallic representation of Shiva. So it’s a god cock. A big, stone god cock. You see these all over India, literally everywhere, from tiny road side lingas to massive ones in temples. The first one ever was built by Parvati from sand and she worshipped it so that’s where that came from. It’s a symbol of fertility. There are over 800 figures carved into this temple, inside and out, and the sanctum is position under the tallest spire. Apparently it was built with, and I quote, flawless symmetry. It… what?… no it’s not! It’s actually unsettlingly wonky, you just have to stand directly in front of it to see that! That was upsetting.

There are a lot of stories attached to this temple, I’m not going to write them all here, and a lot of information about tantrism which is that thing that Sting does and lets you have really awesome sex without having to change the bedsheets. Its a “supernatural state of consciousness” where you merge with your partner and become one with god. Something like that anyway. The headstand carvings which look like the world’s most uncomfortable sex position are something to do with Yantra, a tantric thing, and there was a lot of talk of sixty four yoginis who liked watching people shag, and an “angry durga” called Chamundi Devi who is one of seven mothers and looked quite pissed off. The yogini temple is always isolated. Probably because they’re fucking terrifying. There was a lot to take in with this temple, lots of unfamiliar names of deities. I moved onto the temple right next to it, Jagadambi Temple which used to be dedicated to Vishnu but now belongs to Parvati, then onto the last few temples. 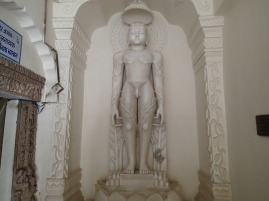 Statue of a tirthankara. There’s always a disproportionate amount of penis in Jain temples.

Part of the Jain temples.

They’re all fascinating in their own right, carved beautifully with sursundries (heavenly beauties), mythical creatures, gods and couples. Or groups. Whatever gets your rocks off. I learned a lot today, such as when a woman puts vermillion in her hair parting it means she’s married. And Ganesh, I think most westerners know this story or variations of it. The one told here says that Shiva would often bugger off for years and years and Parvati would entertain herself with her friends, but she was lonely and longed for a son. One day, whilst having a bath, she made a little figure out of soap and breathed life into it because she’s a goddess and they can do tha shit, called him Ganesh and raised him as her son as one does. Shiva returned after many years and found this strange bloke stood outside Parvati’s inner chambers, guarding it as she bathed, and he refused to let the weird looking blue dude in because he didn’t have a bloody clue as to who he was. Shiva went ape shit. They fought and Shiva cut off Ganesh’s head. Parvati was understandably upset by this and begged Shiva to restore his life so he pledged to replace Ganesh’s severed head with the head of the first animal he saw, which happened to be an elephant which was pretty fucking lucky if you think about it. There’s something not quite as awesome as a god with the head of a squirrel.

After the Western Group the rest of the temples around Khajuraho seem kinda, well, meh. The day after I did the big tour I rented the worst bicycle in the world and visited a few more places which were pretty cool, including a Jain Temple, y’know, just in case I hadn’t had my fill of stone penis yet. I’ve been to a couple of Jain temples and they seem to depict their Tirthankaras, their saviours, stark bollock naked. I guess it’s something to do with wanting to live a simple life in poverty but it’s a good job it’s a religion founded in Asia, they’d bloody freeze to death if they’d tried to kick that one off in London. I probably should have looked at all these little temples first because at this point I kinda felt I was pedalling a pile of rust around in the Indian heat for very little reason, and I felt like I’d been kicked in the cunt, so I sacked off that idea and went in search of food which is when I was given a cracking piece of advice which I shall pass on to you, dear reader, who is probably just my mother because I seriously doubt anyone else has the time or patience to wade through all these words I keep throwing at you. As I walked through town a very jolly, cheerful chap stood in the doorway to a guesthouse and called out, “Namaste, madam! Be careful in Khajuraho! There are many bastards!” I smiled and waved my thank you then wandered off to apply idli sambhar to my facehole at the South Indian restaurant I’d found the day before.

Khajuraho, Madhya Pradesh, India
I can’t remember the name of the place I stayed, I was lead there after efforts to find somewhere affordable proved futile.

2 thoughts on “The Mildly Pornographic Temples Of Khajuraho”