Java, you’ve been wonderful. Apart from Probolinggo. You can go fuck yourself. We left Java via Banyuwangi on a ridiculously cheap ferry to Gilimanuk on Bali, the island everyone flocks to for lush, green scenery and all the beaches you can get lodged firmly in your crack. Once you’re off the ferry obviously your sweaty white face will be targeted by taxi drivers and touts, the latter of which have figured out that backpackers would rather take public transport and will lead you to the bus station and you’ll be massively overcharged because they’ll get a kick back regardless of their involvement in your choice of bus.

There’s no obvious way around this. They’ll claim the credit for your arse being seated on that vehicle and you’ll be charged accordingly. Whatever, we just wanted to get to Pemuteran, and it seemed we were the only ones, and we were told this bus wasn’t leaving for an hour but if we paid a load more cash we could get a taxi. We said we could wait despite the rapid fluid loss from all of our pores, and about fifteen minutes later the driver started the bus up and off we went. An hour my over-sized arse.

My god it was the slowest bus in all the land. We fell asleep on our pile of bags and woke up just before we rolled into our town of choice and were deposited on the side of the road with a recommendation for the “cheapest place in Pemuteran” which, as it turned out, was true. I found this out after abandoning Tarrant in a warung with all of our bags whilst I went on a mission before we decided to stick with Mango Moon as we were advised to do so in the first place. And fuck me, Bali is expensive compared to Java! No more Rp10,000 nasi goreng it seemed. We were looking at Rp25,000 minimum, but guys, there’s beer. There’s beer everywhere.

Java is predominantly Muslim whereas Bali is Hindu, and whilst in Java there was rarely beer available outside of restaurants in epic tourist ghettos, in Bali you can buy tasty cold Bintang from shops on the side of the road or from pretty much every slightly overpriced warung you stuff your chops at. So we found this place that had dogs. We’d been dog starved in Java, Muslims generally don’t like dogs much, this is what we were told. They had two adult dogs and a yappy little puppy which we fell in love with and mauled accordingly because it was tethered and couldn’t run away from us. The food was pretty good too and we resigned ourselves to the fact that we’d probably need to increase our food budget slightly if we were to get through Bali without starving to death.

So anyway. Pemuteran. It seems like a couples kind of place. Lots of big resorts with manicured lawns which take up the entire seafront and you literally have to walk through them to get to the beach and back whilst glowering in envy at the sheer luxury you can’t afford. You can sit in a beachfront restaurant and apply Bintang to your facehole whilst watching the fiery skyball sink, but the main thing here is snorkelling or diving. The fishermen of Pemuteran accidentally destroyed the coral reef, and by “accidentally” I mean they blew the shit out of it with dynamite and poisoned it with cyanide, because apparently it’s okay to consume fish that have been killed with cyanide? Really? This is a thing? These days those fishing methods are quite obviously banned and the town have been trying to rebuild since 2000 using something called Biorock, which is where they position structures on the seabed and use a very mild electric current to stimulate coral growth. 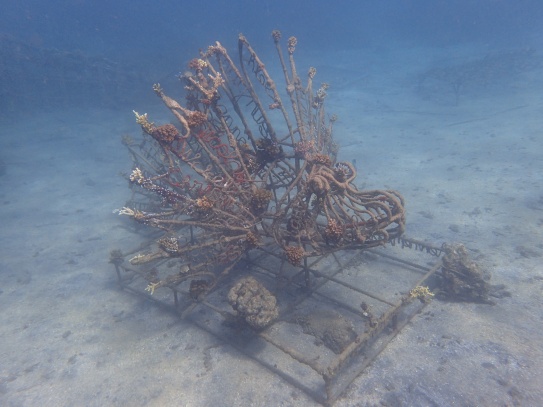 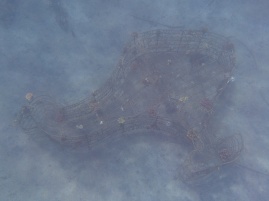 It’s Bali. You have to stare at it a bit and maybe squint, but it’s definitely Bali.

Divers went out and collected bits of living coral, usually from damaged coral which would have died otherwise, but sometimes they broke bits off healthy coral to make sure more species were represented. They they attach them to these structure which are in all manner of shapes and you legit don’t need to fork out for a dive here, they’re metres from the shore, literally anyone who’s remotely buoyant can head out there and sacrifice their top layer of skin to the sun god. We snorkelled around and saw some amazing stuff. The seafront resorts are heavily involved in this project, especially Taman Sari, and most of the Biorock reefs are located in front of these hotels not at all far from the shore. The resorts donate the electricity required.

We spent ages bobbing around on the surface and duck-diving to get a better look at everything from coral to blue sea-stars to anemone housing tiny clown fish. I upset a Picasso trigger fish by floating around above it for too long and it kept swimming at me really fast with its mouth open. I tried not to be intimidated on account of it being a fraction of my size but it looked like it could quite easily remove a chunk of flesh should it feel like it so I buggered off. Turns out their territory funnels up so I was well and truely in its space. There were parrot fish too, and angel fish. All manner of fish I couldn’t identify, and these Biorock structures in different shapes.

A hammerhead, a turtle, a lion fish, an anvil sort of thing which took me all fucking day to work out was meant to be Bali, or just dome shapes. And guess who went snorkelling without sun protection? Yep. I did. It’s not like I didn’t know I’d get burnt to the kind of crisp even your drunk weird uncle wouldn’t serve at a family barbecue. I’m a shade of red that’d enrage a partially blind bull. My back can probably be seen from the moon right now. It serves me fucking right to be fair. I deserve to peel. Apart from snorkelling and trying not to get half the black sand beach stuck to me we didn’t get up to much here apart from gawping at sunsets and drinking Bintang. I get bored on beaches, especially when I have to spend the majority of my time carefully arranging and rearranging the sarong I’m sitting on so the sand stays the optimum distance away from me. I hate getting the tiny particles of evil on me. But I love beaches. Yeah, figure that one out.

I don't know if I mentioned it but we actually went to Antarctica recently (I know, I can't believe I've barely mentioned it) and we saw an absolute metric fuck tonne of ice there and it was imposing and beautiful and majestic but aside from the sod off great big icebergs casually bobbing past the ship it didn't actually move. No amount of staring at it really intently would make it calve. So we took ourselves off to the Perito Moreno Glacier about 80 kms from El Calafate to gawp at even more ice.
After spending ten days shovelling obnoxious quantities of incredible food into our chops on the ship (you know, the one we took to Antarctica) we figured we should probably do a bit of walking. My trousers didn't fit anymore, I had to unbutton them to sit down, but I don't know what I thought would happen if I kept having two breakfasts and two lunches every damn day. My legs had forgotten they had a function other than transporting me between the dining room and the biscuit tin.
Day 8, our last proper day in Antarctica. I'm not crying, you're crying. We woke up to the sight of Deception Island looming outside the window, a volcano which last erupted in 1969 I think? We moored in Whaler's Bay and learned all about the ruins of the Norwegian whaling operation in the 1930s. Photo 6 is where they stored the whale oil. Photo 8 is where they melted the blubber into oil. Try not to gag.
Day 7 started with a trip to an island in Mikkelsen Harbour to put some nesting gentoo penguins in our eyeholes. Nope, still not board of the waddling little comedy shows wrapped in a tuxedo. Those piles of stones they're lying on are their nests, they've all got eggs. If you close one eye and squint with the other this could be a scene of tourists sprawled on the pebbles at Brighton beach. It looks about as comfortable.
Day 6 started with killer whales (photos 6 & 7) but also a humpback whale in amongst them. Apparently they're not the type of killer whale to take down a humpback and it's more likely the humpback was trying to chase them out of its area like a grumpy old bloke shooing teenagers off his lawn. Or in this case, a slightly murderous family.
Day 5, and we woke up to an Antarctic blizzard, the snow sweeping in sideways and settling on the deck. Obviously this meant we had to spend a few minutes after breakfast lobbing it at each other like the mature and sensible adults we are.
Loading Comments...
%d bloggers like this: