There’s nothing like waiting for a train in India to make you feel like you’ve got three heads and 10 metre tentacles instead of arms. There I was, sat on my bag on the platform at Bareilly, when someone asked me where I was from. I looked up. Guys, I was surrounded. Literally 360 degrees surrounded by men, women and children, leaning in and staring at me like an exhibit in a freak show. Being all British and polite I addressed the man who’d spoken to me and stood up because it’s less intimidating having about 30 people gawping at you when you’re on your feet, had a little chat about the usuals, then shuffled off down the platform and sat back down on my bag. Maybe an hour later it happened again. This time, a bloke in his 20’s lead me away with the words, “I am sorry for my countrymen. It is embarrassing.” We chatted for a while, he deliberately missed his trains because he was worried about me. Probably worried about the clueless white girl’s poor decision to try and travel general class for 10 hours to be fair, and as my train rolled in he told me I should just go to sleeper class and if I gave the ticket inspector more money , he’d give me a berth if there was one available. Nawwww, I’d be fine. I’d travelled overnight in general class before and… oh. I glanced over at the coach I was meant to be on and men were literally spilling out of it. There was no room, not even for a little one. I sighed, thanked my new friend and made my way to sleeper where I made myself at home by the door with a bunch of guys where you basically just snatch bits of sleep in between stops.

And seriously, I’ve never felt so looked after as I have been on Indian trains. It was after midnight when the conductor came around. The guys had a laugh with him as they handed over rupees, they got off at the next stop anyway so I guessed they just had to pay because they’d been busted in the wrong coach. He got to me last and didn’t even look at my ticket, just asked me where I was going.
“Amritsar,” I replied.
“Amristar?”
“Yes.”
“Oh madam. Train is full. No more berths.” He seemed dismayed.
I looked at him, not sure what this meant, before asking,
“Can… can I just stay here?”
He broke into a huge smile and said I could, and he didn’t look at my tickets or ask me for more money either. And later on when a load of berths became free the men I was sharing the floor with filed into them, a couple of them indicating that I should take one too. As another bloke tried to take the berth they were offering me he was shooed away. My ticket was checked again at around 2.30am by a different guy. I handed it over, telling him I could pay more, and he handed it back with a head wobble and that wonderful, universal hand gesture that basically means “don’t worry.” So I’m still unsure of the rules but I think this will be the last train I catch in India. I’ll genuinely miss this experience. There’s nothing quite like cruising through the countryside with a coach full of strangers that treat you as a friend.

Eventually, finally, the train rolled into Amritsar. There are a shit tonne of guesthouses here and even a hostel but I had my little heart set on staying at the temple. Y’know, for the experience. Joe of Darjeeling/Cherrapunji fame had stayed here in the foreigner dorm and had told me you just approach the temple from the front and head around to the left. From there it’s a piece of piss. You just have to wander around the outskirts of the temple with your worldly belongings strapped to your torso looking slightly lost and smiling men in turbans will just assume you’re looking for the foreigner dorm and point you in the right direction. If you weren’t looking for the foreigner dorm then that’s where you’d end up anyway because that’s where you get sent. Usual checking in procedure is observed then you’re taken to the dorm which is as you’d expect it to be; basic but comfortable but let’s face it, a pallet of bricks would be comfortable after that bloody train journey.

This temple then. Sri Harmandir Sahib, the Golden Temple (not a direct translation, this is just the English name owning to the colour), is the holiest temple in all the Sikh religion. I figured I’d spend an hour having a look around it in daylight. I left my footwear in the dorm, threw my sarong over my shoulders and picked up a piece of fabric that looked like it had been hacked from a particularly ornate set of curtains and had probably been sweated in by several humans before me, and covered my head. Caps aren’t allowed in the temple. I splashed through the water at the entrance and entered the temple and guys. Wow. I think I grazed my jaw when it hit the floor. The Golden Temple itself, the inner sanctum, isn’t big. But it’s stunning. I’m probably slightly biased, I’m hopelessly attracted to shiny things. But the queue to the inner sanctum was massive and contrary to popular belief, the British aren’t attracted to queues like wasps to your can of Fanta. I decided to just stroll around the outside of the holy tank and take thousands of photos. Being back in India after so long in Nepal though, you kinda feel like a bit of a celebrity again. As a westerner you can’t walk 10 paces without someone asking to take your photo, or just shoving a camera in your face. It’s like you’re suddenly the most interesting thing in there and sod the big shiny thing in the middle of the lake. However long you thought it’d take you to get around, add half again for all the “one photo please” occurrences that anyone who’s ever spent any time in India knows generally means many photos.

After I’d gotten my fill, I shuffled back to the dorm, all of my basic motor functions acutely aware of how little quality sleep I got the previous night, and sprawled out on my bed for a little nap before the ceremony I wanted to check out later. Less than an hour’s tuk tuk ride away from the city was Wagah and the nightly border closing ceremony between India and Pakistan. As you stroll about Amritsar in search of kulcha (a local bread food similar to paratha) or a shoe wallah to fix your sandals, men will ask you if you want to see the ceremony and try to get you to book a ride. You don’t need to book a ride. There are more people offering the service than people wanting it, you just have to loiter around the front gates of the temple when you’re ready to leave and someone will approach you. It’s about ₹100 up and down. After drooling into my pillow for an hour I dragged my unwilling carcass out of bed and shuffled to take a look at the site of one of the most shameful events in the history of the British occupation of India – The Jallianwala Bagh massacre.

Recently I’d watched “Ghandi” and the Jallianwala Bagh massacre was depicted in the film. I couldn’t quite believe it. Seriously? I know the British were cunts during the occupation of India but would they really corner unarmed men, women and children and open fire on them? The idea of it chilled me to bone and basically moved me to tears. But yes, it was true. It happened. And they still have the bullet holes in the wall to prove it. I’m not 100% sure why they fired upon unarmed civilians. There was a lot of concern about potential unrest directed against the occupying parties at the time. I’m not throwing this out there as an excuse, I’m mostly angered at a) the British occupation of India and b) the fact we learn fuck all about this at school. But the British were concerned about an uprising in Amritsar and when thousands of people congregated in one place for a festival and General Dyer decided that the best thing to do was to shoot the shit out of them, aiming for the exits they were trying to escape through. Hundreds died. The only reason more didn’t die is because General Dyer couldn’t get his machine guns mounted on armoured vehicles into the garden. So I wandered around the gardens for a while, took in a bit of history, before deciding that I should probably head off to check out this border closing ceremony. 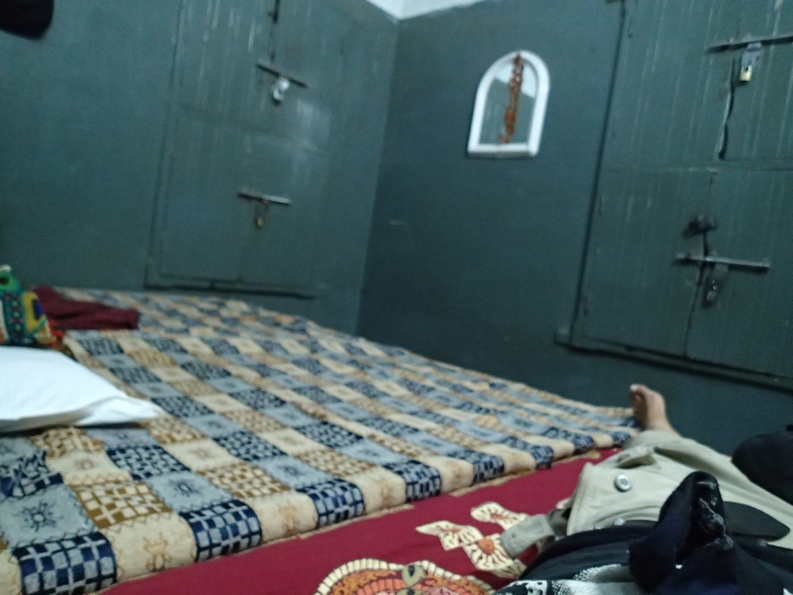