After lots of research which basically involved accosting anyone who’d been and demanding to know things, we decided to trust that there would indeed be tent accommodation and food at Triund once we got there and all we needed to bring was snacks, drinks and some warm clothing because it gets nippy up there. Oh, and waterproofs. All of the fucking waterproofs you can get you mitts on. It was overcast when me, Jess, Theo and their Dutch friend they’d met in Nepal, Nienke, set off from our guesthouse in Bhagsu but it wasn’t pissing it down just yet. We talked about how to handle it if the weather got bad and we decided that we’d just press on anyway because we’re double hard bastards who weren’t scared of a bit of rain, even when we saw it sweep in over yonder and when we looked up we could see that we’d be walking into cloud. Well it’s all part of the experience, kids. All part of the experience. *grits teeth*. We trekked up and onwards, through the cloud and fog and the rain got heavier and heavier but it wasn’t like the rain I get back home living on the south coast of England, the kind of rain that comes in sideways with the wind and turns all of the side roads into terrifying wind tunnels hell bent on whisking you into oncoming traffic. It was just a torrential, straight up downpour. 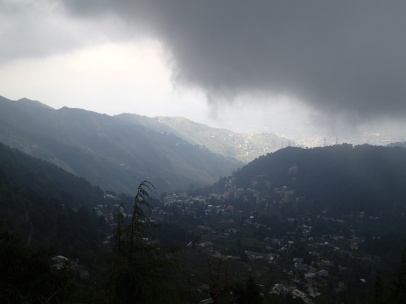 There are plenty of little cafes up the trail because it’s a popular one and this is India and one of the thing I love most about India is that where there are potential tourists, there’s gonna be tea and Maggi noodles. We huddled into Magic View Cafe which claims to be “the oldest chai shop since 1984.” Oldest where though? One the trail to Triund? In McLeod Ganj? India? The world? Actually I gave very little fucks at that point because I was busy applying hot tea to my facehole and taking selfies. It’s called Magic View because when there is a view it’s meant to be epic. I glanced out at the cloud and rain. I can absolutely believe that but right now the view of anything with a roof was pretty damn magic to me. It did actually stop raining as we were crowded under that blue tarp with the other tourists. Holy fuck balls. Well I wasn’t expecting that to happen. We headed on our way and tried to cover as much ground as possible between the cafe and the next downpour which wasn’t that much. Well if you didn’t laugh you’d cry. Not that anyone would see your tears against the rain flowing down your cheeks.

Oh it wasn’t as bad as I’m making it sound. Yes, it hardcore pissed it down for the majority of the walk but it’s not awful. We had waterproofs, there were places along the way to take shelter where humans vyed for space with goats and whilst the trail is most very definitely up, it’s not an awful, scrambly up until the very end. Nienke wasn’t coping very well though, she’d been ill recently anyway so me and her hung back as Jess and Theo went on ahead. I’m always up for a slower pace anyway to be honest because I’m a lazy twat with a penchant for sitting down. Not only had the rain stopped by the time we got to the near-vertical bit that sent my base desire to remain predominantly horizontal with a glass of wine in one hand and the TV remote in the other into a panic attack, the cloud had cleared up and bugger me backwards, was that… was that blue sky and sunshine? It was indeed. We clawed our way up that last, steep hill and if, like me, your passions in life include cheesecake and bacon butties, by the time you wheeze your way into Triund at 2840m you’ll feel like your lungs have been sandpapered and your calf muscles are seriously contemplating mutiny. My dear sweet *insert deity here*, it’s beautiful up here!

There are indeed places to eat and stay. By the time me and Nienke shuffled in, Theo and Jess had already located and sorted out a deal with a bloke at Sunil’s Chai Shop. We’d all be sharing one tent which was cosy and if we weren’t friends before now we certainly would be afterwards (unless I accidentally gassed them all with my nighttime farting), and we were provided with a sleeping bag in a dubious state of repair each. Once you’re up here there’s not much to do but socialise and enjoy the stunning views. The cloud rolls in and out pretty rapidly but it didn’t rain again so we took a little wander around the area and got chatting to a few other people including four Indian blokes from Delhi who’d paid for a tour up the hill and were staying in an actual structure made from stone as opposed to a flimsy tent. Still not worth it though, they seem to charge way too much for excursions from Bhagsu to Triund and you really, really don’t need a guide. That evening we just chilled out, bumped into Cookie Walla and had a chai with him, ate chow mein at Sunil’s and played cards, and practiced some poi as the sun went down. Well, Theo practiced some poi, I hit myself in various parts of my increasingly bruised anatomy with my kevlar on a bit of chain. I was talking about taking more lessons to a woman but she told me you didn’t have to take lessons, just swing the poi and listen to what your body wants to do. Yeah, that’s not gonna work for me, sweetheart. All my body wants to do is sit down and drink wine, if I listened to my body I’d never get anything done.

It’s a surprisingly restful sleep up this hill. We woke up the next day and waited around for the guys at Sunil’s to get their shit together so we could buy some egg based breakfast products and chai. Okay okay, I woke up and went in search of breakfast before murder brain set in, the others were much less inclined to get up just yet, fully embracing the peacefulness of Triund. The sun was just creeping up over the mountains and it was a beautiful day. So there are two ways up to Triund which meant there were two ways down so we decided to try and get down the other way because how hard can it be, right? Turns out that the trail is a bit less defined than the way up and you have to cross lots of grassy bits, but it’s worth it I think. It’s much different to the way up, you pass a lot of little stone buildings on this trail but no tea shops. Jess wanted to keep up with the Indian lads and their guide and whilst I absolutely saw the logic in that, I can’t walk that fast down hills. I need to pick my way slowly and carefully and sometimes I need to shuffle down on my arse and often I need to stop and question all of my life choices that had lead me to this point. Nienke was more my speed on account of her still not feeling 100%, bless her. The cloud moved in and out as usual and the path was a relentless down. The kind of down that none of your leg joints are going to be any manner of fond of regardless of your fitness level and your toes get pretty fed up of being jammed to the front of your trainers.

This trail brings you out by the big waterfall, the one that’s sacred and Hindus bathe in it. There’s a cafe at the top where Nienke wanted to stay and rest for a while but if you’re already a bit exhausted and not in the best of moods it’s no place to be. Foreigners, especially women, attract a lot of attention and unless you have the mental capacity to cope with the stares, the questions and the unsolicited photos you’re best off pressing on. Nienke wasn’t at all well and we were basically nearly there now. There’s a path from the waterfall that leads straight to View Cafe Guesthouse where she’d be staying on, and we’d be utilising her shower before we headed off to catch an overnight bus to Manali after a quick visit to Cookie’s to cram our digestive systems full of ice cream products. Mate, I was really going to miss Bhagsu. There’s nothing about it I don’t love. The little local hikes including the stunner that is Triund, the chilled out way of life, all of the activities you can do to embrace your inner (or outer) hippy. One day I shall return, and I shall stay here until I’m ready to leave, and by the time I leave I will be a poi champion, and several kilograms heavier on account of all the Hello to the Queens.

I don't know if I mentioned it but we actually went to Antarctica recently (I know, I can't believe I've barely mentioned it) and we saw an absolute metric fuck tonne of ice there and it was imposing and beautiful and majestic but aside from the sod off great big icebergs casually bobbing past the ship it didn't actually move. No amount of staring at it really intently would make it calve. So we took ourselves off to the Perito Moreno Glacier about 80 kms from El Calafate to gawp at even more ice.
After spending ten days shovelling obnoxious quantities of incredible food into our chops on the ship (you know, the one we took to Antarctica) we figured we should probably do a bit of walking. My trousers didn't fit anymore, I had to unbutton them to sit down, but I don't know what I thought would happen if I kept having two breakfasts and two lunches every damn day. My legs had forgotten they had a function other than transporting me between the dining room and the biscuit tin.
Day 8, our last proper day in Antarctica. I'm not crying, you're crying. We woke up to the sight of Deception Island looming outside the window, a volcano which last erupted in 1969 I think? We moored in Whaler's Bay and learned all about the ruins of the Norwegian whaling operation in the 1930s. Photo 6 is where they stored the whale oil. Photo 8 is where they melted the blubber into oil. Try not to gag.
Day 7 started with a trip to an island in Mikkelsen Harbour to put some nesting gentoo penguins in our eyeholes. Nope, still not board of the waddling little comedy shows wrapped in a tuxedo. Those piles of stones they're lying on are their nests, they've all got eggs. If you close one eye and squint with the other this could be a scene of tourists sprawled on the pebbles at Brighton beach. It looks about as comfortable.
Day 6 started with killer whales (photos 6 & 7) but also a humpback whale in amongst them. Apparently they're not the type of killer whale to take down a humpback and it's more likely the humpback was trying to chase them out of its area like a grumpy old bloke shooing teenagers off his lawn. Or in this case, a slightly murderous family.
Day 5, and we woke up to an Antarctic blizzard, the snow sweeping in sideways and settling on the deck. Obviously this meant we had to spend a few minutes after breakfast lobbing it at each other like the mature and sensible adults we are.
Loading Comments...
%d bloggers like this: