Khardung La. At 5602 metres above sea level the locals would have you believe it’s the highest motorable road in the known universe and will sell you appropriately branded t-shirts that’ll shrink if they so much as come within two metres of a washing machine and dye everything you own a kind of blueish colour. Except it’s not that high. I mean, at 5359 masl, the actual altitude of the pass, it’s still pretty fucking high. High enough to upset all of your brain cells that woke up this morning assuming they’d get enough oxygen today. But no, it’s certainly not the highest, not that that would stop me from heading up there with a bicycle. Noooo no no no, I didn’t cycle up there, I’m not a fucking psychopath, I got a lift up in a van then freewheeled back down to Leh because fuck actual pedalling this high up. This is totally a thing here too, there are a few companies that do it so I headed to Changspa Road to find one. Thing is, you need a permit which the agency you use can arrange for you, except the permits are obtained online and Leh doesn’t always have Internet, the whole town can be without a connection for days, but I paid my deposit and left my passport with them anyway.

Austin was pretty keen for some high altitude freewheeling action, Jess wasn’t because she wanted to go a lake on the other side of the pass at some point and she didn’t fancy going up the winding road twice, but then she came along anyway, probably on account of the whole fear of missing out thing. So anyway, the day arrived and we showed up to the shop where we were given our passports back and were handed helmets and gloves and a bicycle each which we had to ride up and down the road to make sure everything worked, especially brakes. Oh god yes, especially brakes! Me and cycling were still getting used to each other at this stage, willingly getting on a bicycle without excessive complaining was quite a new experience for me and I wanted a-grade stopping equipment. Eventually we were loaded into a couple of vans and off we went, winding our way up roads that’d make you fucking seasick if you weren’t so busy drooling all over the windows at the gorgeous scenery. And then we arrived at South Pullu which is why you need a permit, this is where they’re checked and the driver asked everyone to hand theirs over with their passports. 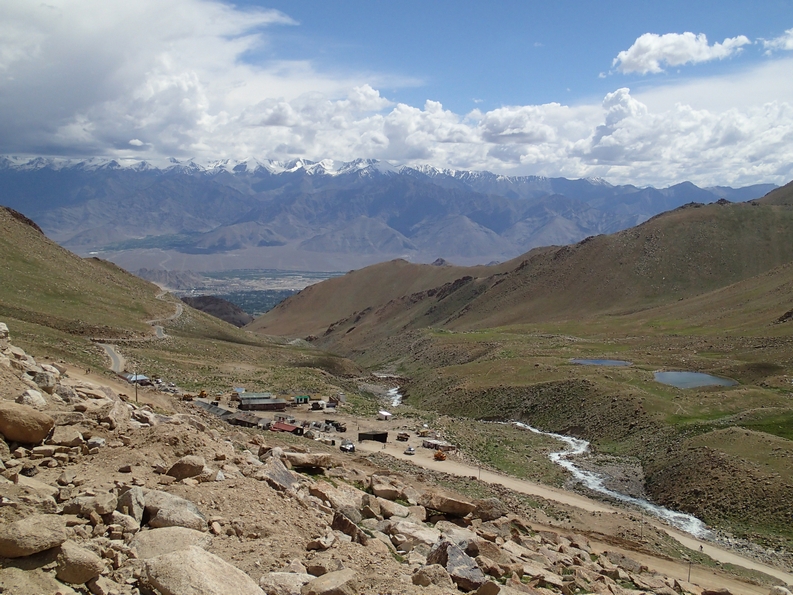 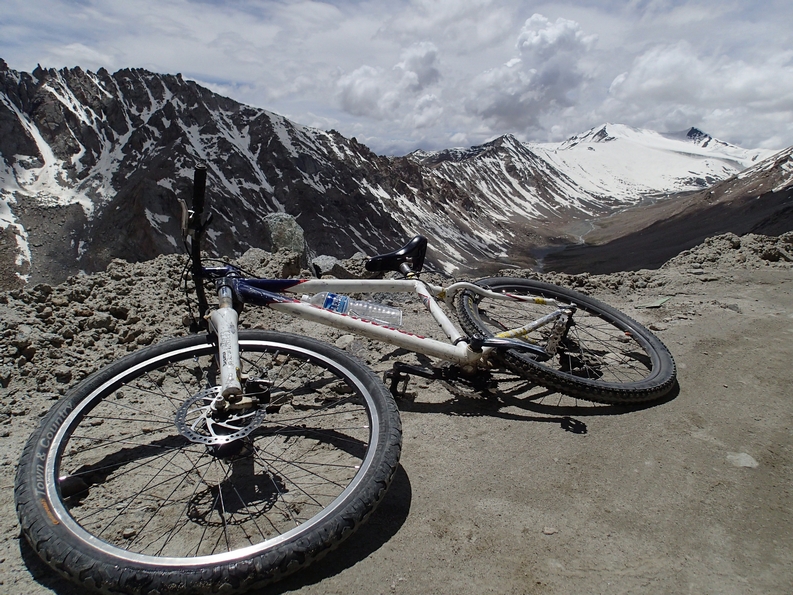 Wait… what? We weren’t given permits, just our passports. We explained this to him, he didn’t even seem a little bit perturbed, I think this probably happens all the time, the town had been without Internet since I’d given them my passport so they wouldn’t have been able to arrange one online. Everyone stayed in the van anyway, he just took passports and permits to a checkpoint and no one checked the vehicle to make sure the tourists matched the paperwork. Typical Indian clusterfuck. Jess was fuming though, we still hadn’t paid the balance for this trip and no way was she going to pay for a permit they hadn’t obtained. Totally fair enough. We didn’t hang around for long before we were back on our way. The road gets crapper he closer you get to Khardungla Top, or K-Top as it’s affectionately known. You have no choice but to crawl at speeds even your granny would laugh at in her 1989 VW Polo on her way to church. It’s better to take your time though rather than veering off the road and tumbling down a mountain, there are wreckages of vehicles halfway down slopes, stark reminders that you need to respect the hell out of the roads and drive to the conditions, not to what you think your driving skills might be.

Once you’re there you won’t be alone, there’ll be people on motorcycles and vans full of humans, all vying for that photograph with the big sign announcing that you’re currently standing on the highest motorable road in the world which we all know is a fucking lie but we don’t care because we’re all relentless tourists and we want an excuse to buy the embroidered patch to sew onto our backpacks. And once you’ve gotten that out of your system it’s time to get on your bikes and head down the hill whilst trying not to hit the potholes that’d send you flying over your handlebars. The three of us stayed together for a short while but Jess wanted to go faster then me and Austin so she went on ahead whilst we meandered down, stopping frequently for staged photographs of us cycling through puddles and the appropriate amount of selfies. A couple of people were struggling a bit, the rapid transition from 3520 masl to 5359 masl had completely thrown them out. Fortunately the last member of the group is followed down the mountain by guides in a pick up truck so anyone having problems can be loaded into a vehicle and taken down that way. That’s the theory anyway but I’m sure I saw those bastards drive past us at one point.

This is so much fun though. As you freewheel down the hill you pass people working on the roads, bandanas covering the bottom half of their faces to protect them from the dust, and they all waved to us as we cycled past and called out, “Julleeeyyyyyyy!! Julley julley julleeeyyy!” which I’m pretty sure is a friendly greeting around here. Everyone says it so either everyone is friendly or everyone hates us. Eventually I pulled ahead of Austin, he wanted to carry on taking his time and I wanted to get on with it, plus I’d mastered the art of riding one handed and taking selfies with the other thus cutting down the need to stop every hundred metres. Heading back through South Pullu posed no problems despite not having a permit, no one even gives you a second glance, and as you get closer to Leh the roads become sealed. Thank fuck for that. Just getting on a bicycle makes me very glad I don’t have testicles, I already felt like I’d been kicked in the cunt and I wasn’t even there yet. On I went, past a rock that someone had painted to look like a massive stone frog, and when I got to a choice of directions I stopped. Oh. Bollocks. I literally had no idea which way to go and since I’d lost my phone way back in Dharamsala I had no Maps.Me. I put my bike down and walked a little each way. Nope, none the wiser. I contemplated waiting for Austin or the support vehicle, but I’d no idea how long that would be or even if the support vehicle had already passed me. So I made an executive decision to stay on this road instead of turning off, because how lost could I get, right?

You end up cycling through outer Leh through suburbs where people actually just live and get on with their lives and give no shits about lost foreigners cycling through town. I could see the fort on the hill and decided to try and head for that which is easier said than done when you have to stick to roads because, y’know, you don’t have the power of flight. I managed to get to town though, the road lead there at least, so I got off the bike because actual pedalling was involved now and I didn’t sign up for this shit, plus there were vehicles everywhere and I’m not exactly a leading expert on cycling through traffic. It’s easy enough to get back to where you need to be though, I just pushed the contraption through town asking every other person, “Changspa Road?” which is probably the best bastard known road in Leh, so yay for small mercies. I figured I must have gone the wrong way too because I rolled in at about the same time as Austin, and neither of us had any idea where Jess had got to by this point. But we’d made it. It was awesome, so much fun and I highly recommend doing it if you’re in Leh. I rewarded myself with a massive, cold Kingfisher because dammit, I’d bloody earned it.