We headed to Ubud with Candi and John, two humans staying in our hotel in Lovina who we’d befriended, and when you first arrive in Ubud after you’ve been relaxing on the beach or in the hills, all of your basic motor functions get scared and suddenly you don’t want to stay in a hostel any more, you want a nice, quiet homestay down a little side road. At first glance it’s busy as fuck. So many tourists. We checked into a place called Eka’s Homestay that Candi had found in the Lonely Planet and looked like a bloody temple, and it turned out it was actually the best deal in the area. Then we ventured out. Because monkeys.

Ubud is home to the Sacred Monkey Forest which will cost you Rp50,000 to get in, plus anything which isn’t firmly nailed to your person or stashed in your bag. Oh there are rules. You’re warned via a sign on entry that you’re not to make eye contact with the monkeys because that’s a sign of aggression. You’re also not allowed to touch them, though they can touch you as much as they want. Like lap dancers but with more terrifying teeth. Don’t panic if they jump on you, just drop whatever food you have and walk away slowly, and don’t run or scream in case you scare them. Me scare them? I’m not the one with teeth bigger than my fucking gob!

You’re also not meant to hide food because the monkeys will know you have it and they’ll try to get it. They’re like tiny, hairier versions of me. Marginally hairier anyway. So once you’re inside there are women who will sell you some bananas to feed the furry little fuckers and they’ll tell you they’ll help you take a photo. We weren’t sure what this meant until one of them jumped on Candi’s head and scared the shit out of her but apparently this is a thing.

The woman will hold the banana, the monkey jumps on your head and eats the banana and when you know longer want massive monkey bollocks pressed against your head she’ll wave a stick at it and the monkey will scarper. It’s a system. What you kind of want is a tiny little cute monkey but what you’re probably going to get is a big fat bastard on his sixteenth tourist that day. For the size of him though he was remarkably gentle and light, I was expecting him to be heavier but was much more graceful than, say, me after I’d eaten my body weight in fruit.

The forest is actually pretty fucking awesome in itself, loads of banyan trees and statues covered in green moss, an effect I love. There are temples too which, of course, you can’t go in if you’re not Balinese Hindu, and a cemetery. This is interesting. Hindus are cremated but here they’re temporarily buried until an auspicious day rolls around when they can then perform a mass cremation. You can wander around for ages, watching monkeys get fed or just play or even fight.

There are over 650 monkeys living in six groups and at one point I think a few of them encroached in the wrong territory and were seen off in a flurry of screeching and teeth and freaked out tourists. Mostly you’re protected, there are rangers everywhere with pockets full of nuts to lure monkeys away from people who looked like they were getting uncomfortable, but it’s the women who sell the bananas who are the bosses in this place. The monkeys seem to respect the hell out of these women, possibly because they feed them but they also beat a hasty retreat when they raise a stick. To be fair they even scared me a little bit.

Buuut then there’s this path that leads to a lawless land called the conservation forest. Only the brave or slightly stupid venture here. We ventured. There’s a cage set up where they bait monkeys, sedate them and take them for neutering. Apart from that there’s nothing but a boardwalk lined with small, furry thugs that want everything you own. All of it. Candi had handed me a water bottle which I didn’t put away like the idiot I am and a monkey jumped on me, crawled up me, firmly relieved me of it, unscrewed the cap and drank the water.

So we basically spent the next twenty minutes or so being well and truly owned by small primates. One of them jumped on Tarrant and started trying to unzip her bag. Another harassed John whilst poor Candi was being utterly mauled by one of them. I remembered the women with the sticks. Okay, no worries, I’ll just wave a stick at it and it’ll leave her alone! I found one picked it up and brandished it with as much authority as I could muster. It took the fucking stick off me and hissed. Yep, sorry buddy, you’re on your own I’m afraid. We counted the water bottle as a loss and scurried out of there back to where there were rangers to protect us from the things a fraction of our size. It’s such a cool place though, I would definitely say visit. Just make sure everything you’d like to retain possession of is safely in a bag. 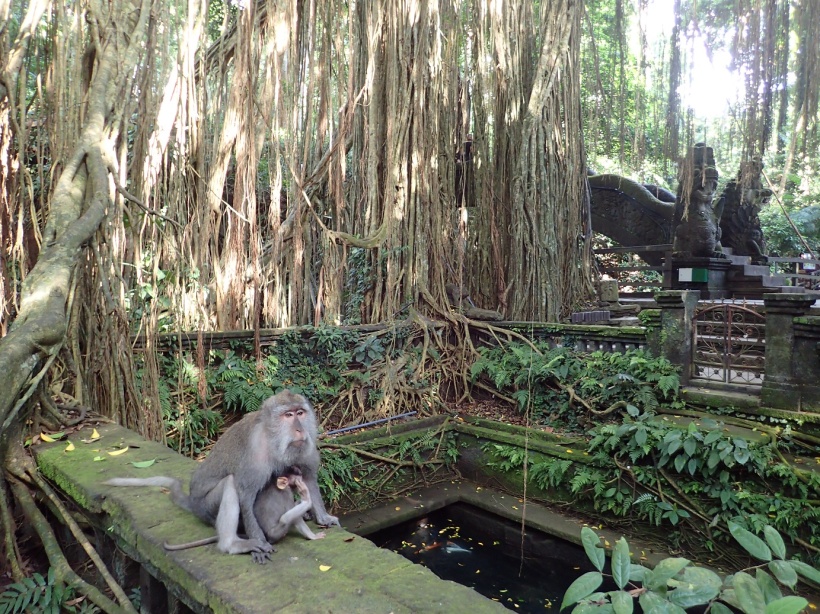 Other cool shit to do in Ubud includes the dance show at the palace. I think they do a different one every night of the week but the guy who ran our homestay was playing an instrument this particular night so we bought our ticket off one of the shit loads of sellers around the palace for Rp100,000 each and took our seats. There are a few dances but by far the one that stood out was the first one where six women performed, seemingly using every damn muscle they had including their hands and eyes. It’s a little bit mental. It kinda made my eyeballs hurt just watching them.

They danced and flicked their eyeballs from side to side whilst contorting their hands in ways I didn’t know hands went. It was excellent. Apparently it’s some manner of welcome dance but if I rocked up to to a mate’s place and they were doing this in the hallway as I walked in I’d called an ambulance and tell them someone was having a seizure. There were a few other performances including a couple who were meant to be bumblebees, and a bloke in a mask who was utterly terrifying. It’s the mask. Masks aren’t right. There’s something about masks that make all of my internal organs recoil in horror and try to get themselves to the centre of my body until I can coax them out with the promise they’re not going to be harvested by the faceless thing on stage.

There’s also this walk you can do called the Campuhan Ridge Walk which we started ultra early so we could get there and back before the sun rose too high and we all fucking melted. It’s a piss easy stroll you can do in your flip flops, you just have to get yourself to the Ibah Hotel and you’ll see signs for it, the first sign being “Going to Hill” with an arrow. Then it’s a nice, straight walk with not too many hills past a temple, along rice fields, through villages where you can stock up on souvenirs or coconuts or artwork if that’s your thing.

Turns out it kind of is. I never bought souvenirs until I travelled with Tarrant and suddenly my backpack was filling up with batik and tiny stupas and now a wooden egg hand painted by some dude we happened to walk past. I literally have no idea what we’re going to do with any of this shit once we’re back. Put it on the mantlepiece? We don’t even have a mantlepiece. We don’t actually have anywhere to live. Whatever.

You can finish this walk at Karsa Cafe with an overpriced cuppa and a nice view then head back, or you can carry on in a loop but apparently most of it is along the main road, so we opted for the former. This had all occurred pre-breakfast and I had a slightly pissed off stomach to appease with the awesome breakfast at the homestay.

I bloody love camping, I don't understand how some people don't like it. Here's a selection of photos of our Kuiu tent in various locations along the Ribble Way. I can't wait to sleep on the ground again, and be kept awake all night because sheep cough like humans, and every noise sounds like an axe murderer, and wake up in the morning hoping that slugs haven't taken up residence in your shoes and creatures haven't helped themselves to your breakfast and... ohhh... yeah... okay now I get it.
If you're doing the Ribble Way backwards you'll be faced with a sod off great big hill after Helwith Bridge followed by a soul crushing descent into Stainforth. Stainforth, however, will reward your gallant effort with this waterfall. The area is obviously popular for picnics as indicated by the scorched rectangles on the grass where people have had BBQs, and there are signs up reminding you that jumping into bastard freezing cold water could actually kill you. I had no intention of jumping anywhere on account of not wanting to inadvertently cryogenically freeze all of my organs, but I did dip a toe in, just so I could say that I'd immersed some manner of body part in the river the trail we were doing was named for.
I like you an' all that, Yorkshire, but your stiles really aren't practical for those of us with the balance and coordination of a drunk badger on stilts.
Ribble Way Day 5, 18th June.
On the first day of the Ribble Way, assuming you're starting in Bum-Fuck Nowhere and heading downstream, this sod off great big hill dominates the landscape. I got suitability obsessed with it of course and couldn't stop waving a camera at it. I've since been reliably informed by @mountain_bimbler that it's Pen-y-ghent, which means we'll actually be tackling this bad boy when we do the Pennine Way next year as part of our Eastbourne to Lands End to John O Groats National Trail crushing extravaganza. I'm suddenly much less fond of it.
Ribble Way Day 4, 17th June
Loading Comments...
%d bloggers like this: