There are these waterfalls called Can-Umantad Falls and we really wanted to see them but we also really didn’t want to end up in a ditch. Again. We spent ages bouncing along an unsealed road that, of course, got worse and worse the further we got from the main road, but then you reach a fork. The left fork will take you down a very short, easy road to a spring. It’s the right fork you’ll want if you want to see the waterfalls. We sat at the bottom of this slight incline, straddling our recently scathed rental scooter, staring at the road. Except it didn’t look like a road. It didn’t look like it had ever been a fucking road. It looked like a rocky dry riverbed.

There was no way we were getting up that without an off-road bike or a four wheel drive or a fucking helicopter. We abandoned any notions we might have had for a waterfall swim that morning in favour of visiting the Chocolate Hills which is a very well known tourist attraction accessible via proper, sealed roads more fitting of a little twist and go. To be honest it’s actually just lovely to drive through the barangays snooping in on local lives and all that. I focused on riding, Tarrant navigated and waved back to the kids who shouted hello to us. This will happen a lot and it’s advisable to have a dedicated Hello Officer so you can concentrate on not crashing.

First though we checked into a guesthouse just so we could dump the backpack so Tarrant could feel a bit more comfortable and less like a pack horse. A weird, pinkish, mutant pack horse, but a pack horse nonetheless. Carmen is the closest town to the hills we wanted to put in our eyeholes, we’d found a guesthouse there called 7P2 so we rocked up and rang the bell. It got a little bit weird. An elderly woman closely followed by a younger woman shuffled to the door looking slightly confused at the fact strangers had come. I told them we had a reservation and she asked me if we had a reservation. Okay, language barrier, no problem, our fault for utterly failing to learn any Tagalog. I told her yes we did and told her my name. She asked my name.
“Claire.”
“Your name?”
“Claire Taylor.”
“What is your name?”
“Claire. Taylor. Claire Taylor.”
“But what is your name?”

I paused, I think I may have resembled a stunned goldfish, before stammering, “That… that’s literally my name…?” I had no idea where else to go with this line of conversation. She had me questioning myself. Was it even my fucking name? We were so confused. Was this actually a guesthouse or had we accidentally stumbled into a private home? They didn’t seem any manner of equipped to deal with visitors. Eventually we were led inside. I had no idea if we were going to get a room or have our organs harvested. Fortunately it was the former and we were handed a business card with instructions to contact her son which we did and he said he would see us when we got back from sightseeing.

It’s a mere few kilometres from Carmen to the official Chocolate Hills complex on gloriously smooth roads. It’s only ₱50 each to get in too. Bargain. And your viewpoint experience comes complete with 220 appropriately sized steps up as opposed to some of the knee-high monsters we’d come across in our travels through the country. Once you’re at the top you’re treated to a gorgeous view of the surrounding landscape including the main attraction, the famous Chocolate Hills, so-called on account of the fact they’re brown in the summer. At this time of year they’re more of a brownish green but that doesn’t make them any less breathtaking.

There’s also the words “Chocolate Hills” spelt out in huge letters in case you forgot where you were, and a large bell which random spawn took great delight in constantly ringing until it felt like I was being stabbed in the brain and it took every ounce of willpower I had not to drop kick the little shit over the side. These hills though. I’ve no idea how they were formed, I’m not sure anyone does, there are theories of course, but until someone works it out they’re just weird brown lumps dotting the Bohol countryside. We saw one on our ride back to Carmen which had sort of broken in two, landslide or earthquake perhaps, and they’re just hills. Not alien pods or dragon eggs or anything. Just hills made from dirt and rocks.

We got back to 7P2 to pick up a couple of things and the son was back. The weirdness instantly dissipated. He shook our hands, introduced himself as Andy and told us we could register properly and pay later if we wanted to get off for more sightseeing. In perfect English he told us where to go to get on the road to visit Sagbayan Peak, another Chocolate Hills viewpoint, and recommended a place for dinner. His mother had already directed us to the public market if we wanted lunch, she was quite adamant that we probably wanted lunch and mentioned it several times, so we’d swung by to grab some grub to take away. Carmen isn’t a foreign touristy place, probably one of the reasons I liked it, so food isn’t ever going to be a sit down and choose off a menu affair which is perfect for us. The local way to eat is, as always, the cheapest and you can always find what they call fast food eateries, or carinderias, but we’re not talking fast food like back home. I’ve read they’re called “pick and point” or “point point”, turo-turo, eateries but I’ve not heard anyone refer to them as that.

Basically, all the food is already cooked and laid out in pots and you literally choose what you want and point at it and they’ll put it into dishes for you. You can ask for it with rice and you can usually eat in if you like, or you can take it away in little plastic bags. The first time we’d gotten food from a local eatery we couldn’t believe the price, we got a whole load of food for two for way less than what we’d been paying for a meal for one in restaurants. We were converted from then on. The only way you can eat cheaper is if you cook yourself, and who wants to do that on holiday? Actually, some people do. I remember in India walking past vegetable markets with people who’d sigh and lament the fact that they missed cooking nutritious meals at home. I’d generally just nod as I shovelled my fifth kachouri into my chops.

Yeah so it pretty much just got creepier and creepier… 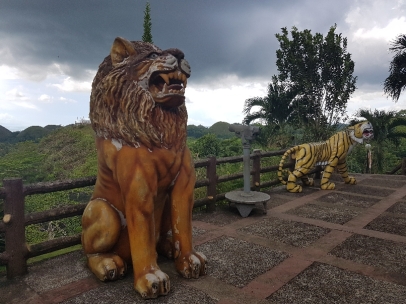 Anyway, clutching our plastic bags of chicken, rice, fried egg and some manner of unidentified dead stuff which had been processed and fashioned into a circle, we drove to Sagbayan Peak. This is an odd place, possibly made odder with it being off season and about to rain so there was hardly anyone else there. We paid our ₱50 each and shuffled up the concrete slope where we were met by a T-Rex and several cartoon characters. So entirely random. The next level up is where you access the viewpoint and you walk through a load of information boards detailing Chinese horoscopes, a canteen which may or may not have been open but it was impossible to tell because it was in darkness but there were staff who seemed to be trying very hard not to notice us, and more statues of cartoons plus a lion and a tiger.

It’s like they got a good deal on a job lot of random statues or some shit. It resembled some manner of abandoned fun house. I half expected the Scooby Doo team to show up in search of a criminal dressed as a headless ghost. They seem to be really trying but perhaps a little bit too hard. The canteen I understand, it’s nice to have a cup of coffee with your lovely view, but do you legit need a butterfly dome? An abandoned cage downstairs indicated they used to have captive tarsiers too but they must have realised the error of those ways.

If you can only see one viewpoint definitely go to the official complex because the views are great. The views here are good too but they’re more of a long shot of the hills. We didn’t spend long, the clouds had started rolling in ages ago and they were just getting blacker and heavier and threatened instant saturation should they burst. We weren’t allowed to eat our take away up there so we shovelled it into our chops in the car park before our stomachs digested themselves then tried to beat the rain home. We almost made it. Almost. If it wasn’t for the fact we really really wanted brandy and spent several minutes scooting round looking for it before giving up in favour of being dry much to the relief of our livers.