A notable difference between scooting around Bohol versus Bali in Indonesia (aside from the obvious lack of elaborate Hindu temples here) is the abundance of petrol stations in Bohol. Of course they have them in Bali too, there just doesn’t seem to be as many and we often found ourselves filling up at small shops that either had a small pump or had the petrol displayed in racks in old Absolut vodka or water bottles. It’s fine with the small pumps, they often have lines marking how much you should be paying, but when you’re buying litre bottles you’re never really sure what the going rate is. You can also buy petrol in old glass coke bottles in The Philippines from sari-sari stores which are just small, local shops that sell pretty much everything and are often in a wooden shack on the side of the road.

Rowel, our guide in Legazpi, bought a litre whilst we were with him and whilst I love the novelty of buying petrol this way I love the not potentially getting ripped-off-ness of buying it from a proper gas station with metered pumps. Of course, Bohol isn’t Bali and whilst in Bali they’ll quite happily charge you triple or more, I don’t think they’re as malicious here. On the rare occasion we’ve met a Filipino who wanted to rip us off they’re usually a tricycle or taxi driver, it’s never been for much, and I’ve been assured that they’re just as likely to rip off their fellow countrymen too.

Anyway, we were almost done with mainland Bohol, we just wanted to put Mag-aso Waterfall in our eyeholes on account of it being the most popular waterfall on the island. We rightly assumed we wouldn’t be allowed to swim in it on account of the risk of death but we weren’t followed down this time, and again, the access road was an absolute delight compared to some of the roads we’d conquered and the route down was concrete and relatively safe. Joyous. Not my favourite waterfall, mind. In fact probably my least favourite out of the four we’d visited. I’m not saying I didn’t like it, I just don’t think I ever need to revisit it. Okay, maybe just once more. To put a toe in it. If I tried to put a toe in it right now I’d probably lose my foot to the current.

There’s this little island joined to Bohol by a bridge called Panglao and it’s where the tourists flock to dive and chill and generally have a nice time. We weren’t sure what to expect, it’s low season so we figured it wouldn’t be too mental so we rocked up to Alona Hammocks without a reservation after reading a crap tonne of favourable reviews. It’s only about 5 minutes from the beach and you stay in sort of a bamboo tree house dorm room on mats on the floor underneath a mozzie net. There are no lockers and the shower is open air and it’s absolutely one of my most favourite places I’ve ever stayed, not least because Salvador who runs is an absolute legend. I’ve never met a more chill guy.

We honestly didn’t do much after we arrived here it was just nice to do very little. Manoeuvering a moped around Asian roads on the wrong bastard side is surprisingly exhausting, you’re constantly on the lookout for things straying into the road such as dogs or cats or small humans or large humans. There doesn’t appear to be any manner of right of way, you just move over for the larger vehicle and hope you don’t get crushed. It’s not as chaotic as Indonesia which really is a proper every human for themselves mentality but it still keeps you very much on your toes.

We did the obligatory stroll to the beach which was nice and all that but not the paradise I’d been lead to believe so we shovelled an expensive burger into our faceholes and headed back to Hammocks because it’s just a fucking lovely place to be. Apart from the mosquitoes. As long as you own a bottle of Off to apply generously to your flesh and sit really close to one of the mozzie coils Salvador puts around the place you may just retain the majority of your blood. The joys of living outside.

Unfortunately I’m still not able to dive but I’ve got the name of a clinic in Kota Kinabalu to get a dive medical sorted and get my lungs checked. So so gutted. The Philippines has been on my dive bucket list for years, I’ve always wanted to come here to get underwater and the fact I’ve not been able to do even one dive is genuinely devastating. I might not even be able to dive in Malaysia yet, it depends what they say,but at least I’ll know for sure either way rather than wondering if I could be 20 metres under the sea right now.

Aaaanyway, there’s other shit to do on Panglao Island apart from diving. Salvador lent us a mask and snorkel each and we scooted up to Molave Cove for a bit of snorkelling. It’s not world class but it was lovely, a few small fish, some weird long thin thing, a bit of coral including some stunning blue coral, and a big drop off into the deep, deep blue. Here’s the thing; give me the gear and I’ll happily mince along a coral wall at 30 metres or less without fear. You show me the same wall from the surface and I’ll snorkel along the edge of it and duck dive a little bit but I don’t dare venture too far out. I suddenly feel ridiculously vulnerable, like I just dropped down the food chain a whole load of notches. Literally all you can see is the blue and my imagination starts conjuring up all manner of monsters that might be lurking on the other side of the visibility limit. So yeah, I just contented myself with harassing a clown fish for several minutes for my own amusement. It’s no bloody wonder fish bite me.

We hung out there for a bit before heading into Panglao proper in search of non-tourist food, then we went to this cave. I knew the cave was there but I didn’t know you could swim in it until Salvador told us. It’s called Hinagdanan Cave. As a show cave it’s not going to blow your box apart, it’s just the fact that you can swim in the suitably gorgeous pool inside, floating around on the slightly salty water, gawping at stalagmites and stalactites. Pretty fucking incredible. We were there for a good 90 minutes until we wrinkled. It’s not even that cold, I expected it to be bastard freezing but it’s not. I mean, you wouldn’t run your bath to that temperature but you’ll not risk taking out stalactites with a nipple. It was relatively quiet when we rocked up at around 1.30pm, just one family and us. By the time we left at 3ish the tour buses were starting to roll in and it got pretty busy and loud so we bailed back to the hostel for showers.

There’s also a sunset point right on the west tip of the island which you can drive most of the way to, not that there are many visible sunsets at this time of year but hey, we live in hope. Turned out that the clouds covered the horizon so we just poked around the place a bit and guys, it’s a combination of cool and a bit fucking weird. It feels abandoned, like it used to be something more but fell into disrepair. There’s some manner of lamppost and torn hammocks slung between trees, but the creepiest things are the cages. There are cages everywhere of varying sizes. Could be bird cages. Could be the lair of a serial killer and this is where he keeps his victims before killing them and discarding their dismembered corpses in the ocean. 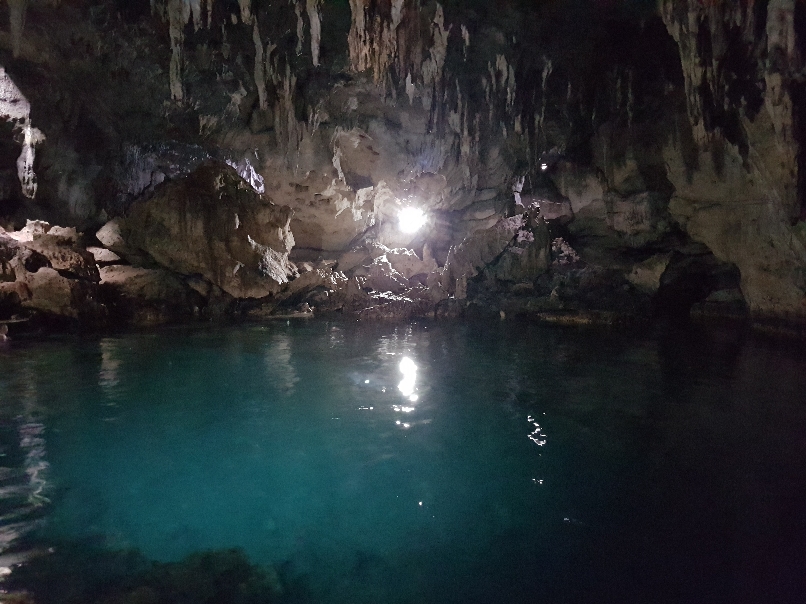 As I pottered around I neared a decrepit shack but I heard the distinct sound of a television or a radio coming from it. Oh fuck me, I’d seen this movie. Could have been worse, mind, could have been banjos. I crept back to Tarrant and we explored the beach a bit, I felt a bit safer here, there were three foreigners chilling on a blanket and I felt confident that if a murderer did indeed come tearing from the shack brandishing a chainsaw I could probably outrun them because they’d been drinking. Yeah. I’ll trip them up and outrun them.

Apart from the feeling that you’re being watched and may only have hours to live it’s cool in that the beach seems to be some manner of fossilised coral bed. It probably isn’t, I wouldn’t know if I’m honest, but there were coral impressions pressed into the rock and that isn’t an easy thing to do, then there were what looked like stone corals welded into the ground. It literally looked like a petrified coral bed. I need someone who knows about this shit to have a look at it and tell me what it is.

So there’s this backpacker bar called Outback and it seems they know how to put on a party and Thursday is ladies night which apparently entails ₱25 cocktails for the female of the species. That’s about 40 of your British pence, exchange rate fans. Excellent. I donned my tightest fitting top so they’d stop calling me sir and give me cheap drinks. We went out with Salvador and another British chick who was staying at the hostel called Emily. The British know how to happy hour. We’re skilled in the art of drinking as much booze as possible in a set amount of time. It’s a national trait. 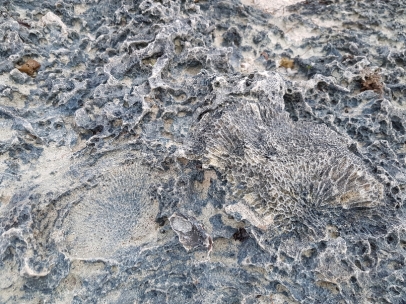 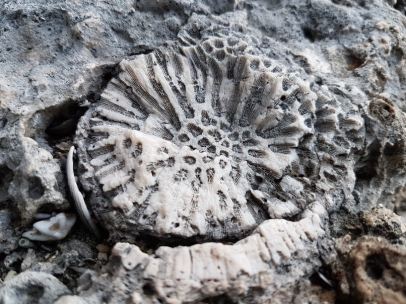 We thought that it finished at 10pm so that’s what we aimed for. We chucked them down like they were water. They’re not water. They taste bloody nuclear. We ended up ordering two at a time of various coloured alcoholic liquids. You remember when you were at school and you split a celery halfway and put half in blue liquid and half in red liquid? Like that except the liquid is Mai Tai and the celery is your liver… The next morning my brain tried to escape from my ear and I looked around for the badger whose arse I’d obviously been licking all night.

On the Friday we had to take the scooter back and tell the man that we’d crashed it. I took them outside, showed them the damage, apologised profusely and told them that of course I’d pay for the damage. He looked at it.
“Was there a dog?” he asked. We’d been warned that stray dogs would often run out into traffic. I had to explain that no actually, we were barely moving and it literally just slipped out from under us. No dramatic story, nothing happened, we just fell over. He looked at us, slightly confused.
“The road was wet,” I told him by way of an explanation.
“Ah, the road was wet… are you okay?”
Oh bless him. I showed him my pathetic little graze on my knee and assured him we were fine. He charged us ₱500 for the damage which is basically fuck all and we went on our way. Sound fella.