Weeeellll yesterday was the write off it absolutely deserved to be. I was tempted to chuck several of my internal organs into the pool at the balete tree just to have the fish give them a good clean. I swear I can still hear my liver gently weeping. Friday night at Czars is the biggest party night on Siquijor so we headed up there with two Filipinos; a woman staying at the backpackers and some dude who showed up from fuck knows where and spent the evening sexually harassing various women. We got there super early though because we’re British and that’s what we do. As a nation we’re still not over the fact all of our pubs used to close at 11pm and we’re genetically disposed to try to fit all of the booze in the world into our livers as quickly as possible. It was nice though, it meant it was quiet enough to chat for a while with the woman whose name has been replaced with all the rum that I drank.

Oh for fuck’s sake. Rum. I never even used to like the shit and now it’s responsible for quite a large quantity of memory loss. We were quite happy to buy our drinks in singles with mixer but it turns out that buying the whole fucking bottle and bringing it to your table is very much a thing here so that’s what we got on board with. Yay for drinking with locals. I think. I don’t remember huge amounts, I remember her assuring us that tricycle drivers rip off Filipinos as much as they do foreigners, we chuckled about our Western inability to fit into tricycles because we’re too tall, and at one point she demanded to know why we didn’t sweat. We looked at each other as our pores emptied litres of the stuff into our eyes. “You white people! You don’t sweat!” We assured her that we very much did. This constant sheen isn’t a look, honey. We don’t strive for this. We are constantly sweating, I don’t remember the last time I wasn’t sweating.

After that it’s a blur. There was music, a live band I believe, and there was dancing but by dancing I probably mean flailing wildly to nothing resembling a rhythm. I remember creepy guy riding back to the hostel utterly hammered as we followed in a tricycle, she turned him away at the door and told him to go home, then we sat on the beach, talked some more and watched the stars. So many stars. Well, I more likely sprawled on the beach and trailed sand back into the room. Sand is pretty much our life now. I don’t think I’ll never not have sand lodged in places sand has no right being. So yes, Saturday was mostly spent alternating between telling anyone within earshot that I was probably dying and collapsing in a hammock on the beach cursing the day I met rum.

Sunday was much more productive. We rented masks, snorkels and fins from the Maite Marine Sanctuary and went off in search of breakfast. It’s not like me to not have a breakfast plan. I usually need to know exactly where my first meal of the day is coming from or I start considering murder a perfectly ethical way of dealing with people who, I dunno, breathe too loudly or something. We ended up on the other side of the island but we’d left too early. Nowhere we passed was open. My stomach was making me very, very aware that I hadn’t sacrificed something delicious to it yet. We were heading towards a viewpoint called Triad and Maps.ME assured us there was some manner of eatery there so that’s where we headed, guiding the scooter up a ridiculously steep hill to Larena Triad Restaurant which seemed to just be opening.

Oh thank fuck for for that. We ordered chicken wings because chicken wings are a perfectly acceptable breakfast food when you’re on holiday, and to Tarrant’s delight they even served proper coffee. Don’t get me wrong, the three in one we’d been drinking is pure powdered joy, but Tarrant likes a coffee. I’m more of a tea girl. The mere whiff of proper coffee in the morning sends my bowels into a frenzy, at least I can enjoy a cup of tea in the morning without risking prolapse. And the views up here! Yes, breakfast was worth the wait. At least it was once I actually had breakfast in me, the minutes leading up to that moment were a bit touch and go.

Throughly nourished on the partial carcasses of dead birds, we headed to a hotel called Kiwi Dive Centre because the Internet told us it wasn’t an awful place for snorkelling. There was no one around so we just shuffled to the beach and went for it. You’ve got to head pretty far out and watch your feet on the terrifyingly spiky urchin balls, but once you’re out there it’s pretty cool. There’s not much in the way of wildlife but there are huge coral structures to gawp at.

We spent a fair amount of time duck diving around them for a closer look. There are also a metric fuck tonne of these red sea stars which we were worried we’d inadvertently killed a load of on the way out. We weren’t looking too hard, we could have stepped on a few, but we were told later on that whilst you probably shouldn’t go around deliberately trampling the little fuckers they’re actually quite destructive to the coral. We didn’t feel so bad after that.

So we figured we’d hit a couple of beaches. I’m not the biggest fan of beaches on account of all the sand but as I’d sort of resigned myself to the fact everything I owned would be covered in a fine layer of the shit for the foreseeable we might as well just go for it. Salagdoong beach is the beach the domestic tourists flock to and with it being Sunday we figured there’d be a fair amount of humans knocking around.

We weren’t wrong. It’s properly set up for tourism with tables and cottages to rent, concrete steps leading down to the water, giant inflatable swans, a water slide, a cliff jump and a restaurant. The sea is a stunning blue colour here, it’s actually a very beautiful beach. I thought I’d give the cliff jump a go, and by “give it a go” I mean “stand a metre from the edge whilst muttering, ‘fuck my life, that’s really bastard high up.'” No, I didn’t jump in the end. Bugger that. I wanted to finish the day with my ribs where I left them.

The restaurant came in handy but the various dogs and cats scrounging round for food will break your heart into several pieces and you’ll seriously consider the logistics of taking all of them home. Well, they certainly chipped away a bit at my stone heart anyway, not enough to hand over all of my food, mind. Just tiny fragments of the occasional chip which I may or may not have resented slightly.

But onwards! We were first told about Kagusua Beach at Hapitanan, the little roadside eatery we were fond of. They referred to it as the “secret beach” but we’d been told about a few times since then so I think it’s about as secret as my penchant for cheesecake but everyone agreed; it was the best beach on the island. You’ve got to walk down to this beach from the parking and a bloke there told us to be careful with our things because thieves target foreigners here. We’d come out with minimal crap anyway and had waterproof cases for our phones so we weren’t too worried about leaving stuff on the beach, and yes, it’s a stunner of a collection of sand, sea and rock. 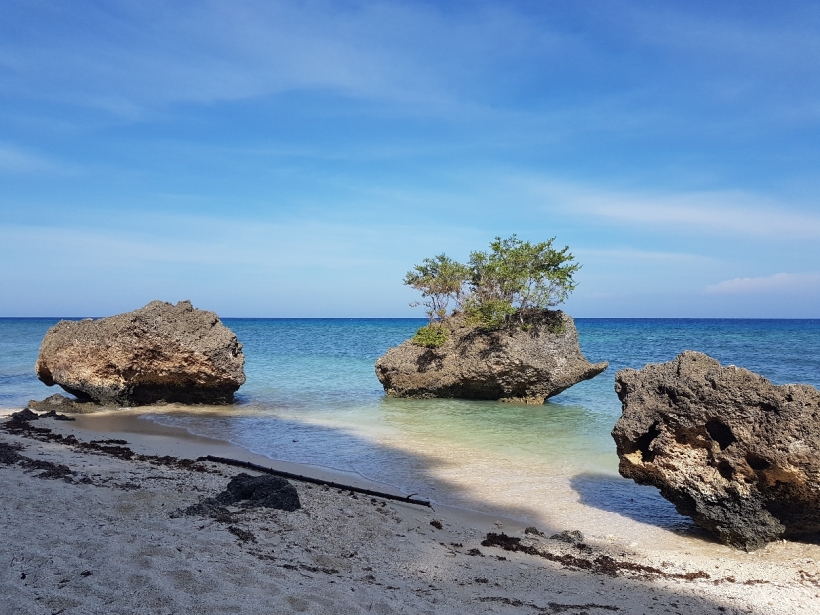 It’s on the east coast so it’s very much not a sunset beach and the sun gets blocked pretty early on. We enjoyed the last of it before the shadows enveloped the beach and we decided to go off in search of a sunset. We planned to go to Paliton Beach for no real reason. I don’t know why we didn’t just head back to JJ’s, that’s a perfectly good sunset beach and would have involved a tasty cold beer which would have been nice now I’d fully recovered from the other night’s excesses and my internal organs had just about forgiven me. Probably in the spirit of trying something different but one sunset beach tends to look like the next.

There’s sky, sea, sand, and very definite chaffing so you might as well go to where the beer’s at. We got quite an early one tonight and I promised my digestive system there’d be no foolish breakfast hunting and we’d just eat at the backpackers the following morning.