We’d decided to have a look around the middle of Siquijor today on account of there being some manner of cave there and also the highest point on the island. There’s also, somewhat randomly, a butterfly sanctuary. It’s ₱100 each to get in which won’t have your bank account dropping to its knees in anguish whilst shouting “WHHYYYYYYY??!!??” at the sky (it’s about £1.50) but it was more than we’d become accustomed to in Asia. We decided it was worth it, not because of the size of it because it’s fucking tiny, but because they guy who runs it seems genuinely passionate about the protection and conservation of butterflies. He spent time with us and pointed out the different species he had there and told us he hoped to expand and accommodate more species. I wouldn’t drive all the way up there just to visit unless you like butterflies about as much as it’s possible to like butterflies before they put you on a register, but if you’re in the area anyway I’d say take a look. 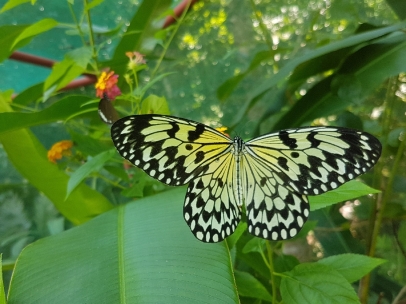 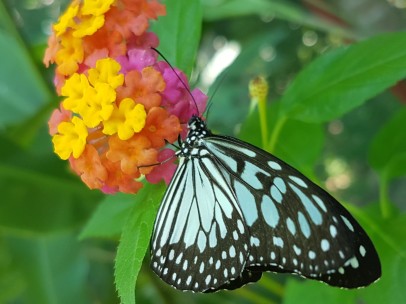 Mount Malabahoc is the highest point on the island made even higher by a metal tower you can climb up. You can pretty much see the entire island from up there, or at least what you can glimpse through the flowering trees. Damn nature, getting in the way of a good view, smelling all gorgeous and looking all pretty and shit. Again, it’s not something to make a special trip for buuuuuut if you’re knocking around the area you might as well have a butchers.

The Cantabon Cave though. Now that’s worth a drive out all on its own. We rocked up and were instructed by a sign to head to the village hall in Cantabon where we’d pay an entrance fee and be allocated two humans to show us around so we didn’t get lost or eaten by cave monsters. It’s ₱20 each plus ₱500 for the guides for up to three tourists. Oh, and light rental is ₱30 each. You’ll want a light. It’s really fucking dark in caves. We’d also come prepared with a change of clothes and our ever-sexy rubber shoes because we now know from experience that visiting caves in Asia isn’t like back home where you’ve got board walks and handrails and lighting that changes colour to atmospheric music. Over here you’re more likely to find yourself dragging your carcass along rocks through bat shit and mud and ice-cold water whilst swearing a lot and trying not to plummet to your death off a precipice. 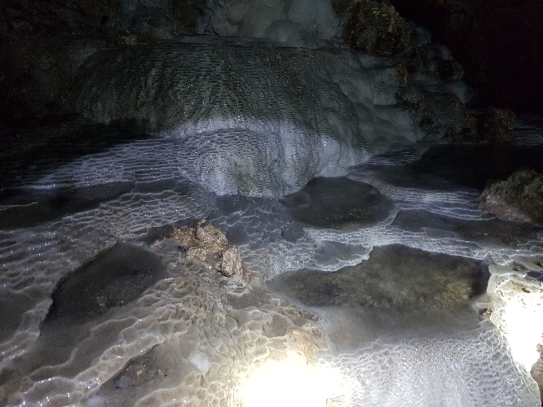 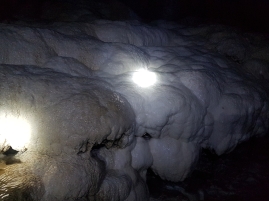 I might have made that last bit up. It’s not that terrifying but I’m really quite uncoordinated so the risk of actual injury is very, very real. Our guides of course did the whole thing in flip flops. It’s a very pretty cave and of course it’s not a dry cave. Where would the fun be in that? There was a bit of scrambling involved, no ones knees or elbows were getting out of this one unscathed, and there was a bit of the kind of crawling where I have to be very careful not to accidentally lean on my own nipple. I did find a bat though during one of our rest stops which we thoroughly bothered until it flew away in disgust.

There was a lovely pool they let us hang out in for a while too. By “lovely” I mean “cold enough to carve my name in the rocks with my nipples” but it was really nice just to chill in this beautiful, natural cave. We weren’t rushed, they let us just hang out until we were ready to leave, and you know you’re knocking on a bit when you emerge from a caving trip and instead of discussing your favourite parts you try to one-up each other on the body parts that hurt the most. Ooh I ached like an old lady. It was a shit tonne of fun though and I’d do it again in a heartbeat.

We spent the rest of our time on Siquijor sampling the delights of various restaurants and bars. Baha Bar was a favourite, they even brew their own beer which you can buy to take away on the condition you return the bottles. They also do some pretty decent food and cocktails. They’re not cheap but if you fancied a Western feel to your Asian experience then this is your place. Ga-ay is another good one. It’s a barbecue place, but it’s kind of like a market in that you go in and buy your vegetables whole, and choose your meat or fish. They’ll grill your dead shit and stir fry the veg you buy. It’s fucking awesome, everything made there fresh for you. Aside from those two there’s really no reason not to stop your stomach from caving in on itself with a sea view. Hotels and guesthouses serving food and drink line the coast. 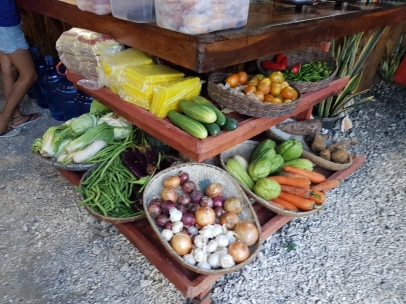 The vegetable selection at Ga-ay. I love this concept. It’s like a market where you buy your fresh veg, except you don’t have to cook it yourself or wash up or anything. 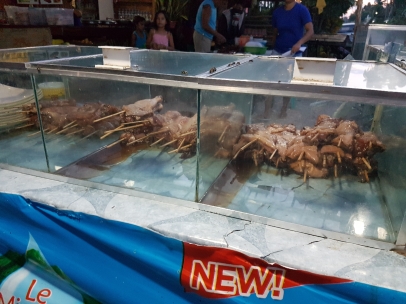 Dead shit on a stick at Ga-ay.

I’m so so glad we came to Siquijor, and I’m so glad we spent the week we intended to. I was worried we’d get bored being in one place for so long but we didn’t, not even once, not even on the day my liver was threatening to pack up and leave me for a nun. And as for JJ’s Backpackers Village, I’ve no idea what the negative reviewers did to upset the staff and the Aussie owner and his wife but we found them nothing but lovely, polite and helpful. 10/10, would risk getting sand in everything I own because I’m completely incapable of cleaning my feet properly after eating breakfast on the beach again.

We’d be heading onwards to Borneo in a few days which I’m excited about but I don’t think I’m ready to leave The Philippines just yet. The whole country has the same taste in music as I do, I don’t think I’ve ever heard so many key changes in a six week period before. The Filipino people are literally the nicest people you’ll ever meet too. There’s so much to love about the country apart from, y’know, the food. I mean, it’s fine in that it gives your stomach something to do other than digesting itself but your tastebuds will be so very bored. I took to carrying a bottle of hot sauce with me and liberally dousing everything with enough of that to strip the paint off a cruise liner. I definitely need to come back here and not least because I never got to do any diving thanks to my mutinous lungs, but everyone kept telling us how much better it is during the high season. It’s incredible now, right now, during the off-season. I mean, how much more amazing can it get?

Useful shit to know:
– ATMs (that’s cash points to us Brits) will charge foreign cards ₱200 per transaction to withdraw cash. There’s no way around this, you’ve just got to suck it up and try to withdraw your maximum every time.
– Getting a SIM card sorted is easy, as is topping up. Well, I say it’s easy, the staff at the shop we bought ours at sorted out the initial set up for us because we weren’t organised enough to sort one out at the airport. After that you recharge it at any sari-sari store that offers it (you’ll see the signs displaying your network outside; we used Smart which seemed to work most places apart from Buscalan and Batad) and to get your data bundle you have to text a code to a number and it’ll deduct the price from your credit.
– Emperador brandy is life.
– Try not to catch a boat the day after cocktails. Trust me. Or you’ll end up clutching the railings whilst a crew member hands you plastic bags and a cotton wool ball soaked in some manner of mysterious liquid that you have to sniff. Seriously. Ask Tarrant. We still don’t know what the ball was soaked in but apparently it was amazing.

Another one from the other night when the sky did the thing. You know the thing. When you have to stop and gawp as you slowly lose all feeling in your extremities because it's eternal March.
A small child on a bicycle kept riding through the water whilst I was trying to get this shot. @tarrank has told me many times that drop-kicking small children is incredibly frowned upon so I was very restrained. I settled for a polite glare and a curse upon its future spawn.
We went out last night to catch the sunset and were treated to a shit tonne of cloud porn. Usually we head to the West Pier because it's closer and devastatingly photogenic, but we thought we'd head to the Palace Pier to watch the starlings and the flappy little fuckers promptly buggered off to the ruin. I'm taking it personally.
It seems I'm currently into zooming in on landscapes in an attempt to, I dunno, make them look more interesting or some shit? Here's a lovely picture of the South Downs with some pylons. I actually don't dislike the pylons. They're not too ugly and they make things like TV possible so I can hand over £150 to the fucking BBC for all the shows I don't watch because they're not Star Trek.
This was taken the other morning which was the last time the sun made an appearance. Then it got really fucking cold, the kind of cold where it feels like angry microbes are Riverdancing on your face in crampons every time the wind blows. We were walking in the kind of mud that sticks to your shoes and doubles the weight of them and there's nothing you can do about it, you just have to hope the mud lets you keep your footwear. Walking in Sussex in the winter is a delight. But I'd rather be on the Downs with zero other humans than on the seafront with hundreds of them for my once a day exercise.
Trigpointing: The noble art of locating and visiting obsolete stone pillars. I like collecting shit, and if I can collect shit that doesn't then take up further space on the bookshelf then it's even better. If collecting said shit sometimes involves slogging through ankle deep mud and tussocks up to your tits in temperatures that'd freeze your snot then I believe nirvana has been achieved. I fucking love Trigpointing.
Follow Travel & Shit on WordPress.com
Loading Comments...
Comment
×
%d bloggers like this: